Since releasing the “Car Locator” Android application about 5 months ago, I posted twice before with sales figures on the Android Marketplace. First, when I got excited after it averaged $20/day for a few days, and second, after winning third place in Google’s sponsored contest, the Android Developer Challenge 2. In both posts, I was a really happy camper because what started as a little side-project while I was vacationing with my family, turned into a few extra bucks for lunch money every day. I feel incredibly lucky to be able to say the app has continued its upward trend and is now beyond my wildest fantasy of what could have been possible. So without further ado: 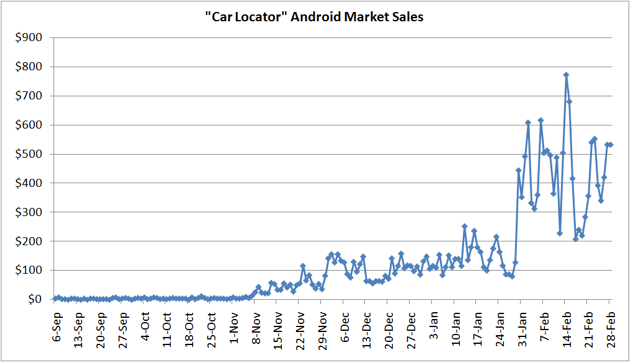 Clearly, I'm on cloud 9 with these numbers, but where does it go from here? Sales of about $13k/month is awesome income for any one person, so it may sound ridiculous for me to think it can go even higher. However, I still think that Android is only a fraction of what it will eventually become. Each release of a new Android handset gets me excited, as it means a wider reach for the Marketplace.

If Android development is something you've been mulling over, I encourage you to make the leap. Though my experiences are clearly not typical, I definitely think Android is the ideal platform to be in for an individual developer.

I'll post again in a month or so with hopefully even better numbers!

This is the personal blog of Edward Kim (aka Eddie Kim). Co-founder of Gusto.