I made quite a sum of money developing and selling apps on the Android market, peaking at $57,000/month (see chart below). Eventually, the business declined, but the rise to the top was an exhilarating feeling -- only it was too short. After the decline of the app business, I jumped back into a new startup, ZenPayroll to look for an equally exhilarating but longer ride. If you want to know what it's like to start a startup, but don't want to spend years of time and your life savings to see what it's like, an app business is a great, low-cost way to get a taste of what it could, or could not be.

In 2008, I started Picwing. With just $15,000 from YCombinator, we made some hardware, then pivoted to software and ran the business for more than 2 years. It was an enduring time for my co-founder and I. More than a year of sweat, blood and tears was initially met with little success. But eventually, we were rewarded with slow but steady growth. After a small acquisition, I eventually left to try my hand at developing and publishing Android apps. My hope was that, compared to Picwing, which took years to build, I could develop and sell an Android app in mere months.

My hypothesis proved correct. Compared to the startup, my experience developing Android applications was much more fast-paced and eventful. It really started with a simple app I wrote called Car Locator in August 2009. After 2 months of publishing it, I was stoked to share in November 2009 through a blog post that I was making enough money to pay for my lunch. Things really started to take off in March 2010. You see, at that time Android was still a very small platform and many questioned its competitiveness with the iPhone app store, so many were surprised and delighted when I shared my success story of making $13,000/month in app sales. The news sent ripples through the tech community, and Car Locator came to be featured in magazines, radio shows, blogs, and even Verizon TV commercials. All this in just 6 months. As Android continued to grow, so I continued to ride the wave by developing and releasing more apps. The business reached a peak when I was doing $57,000/month in Android app sales. 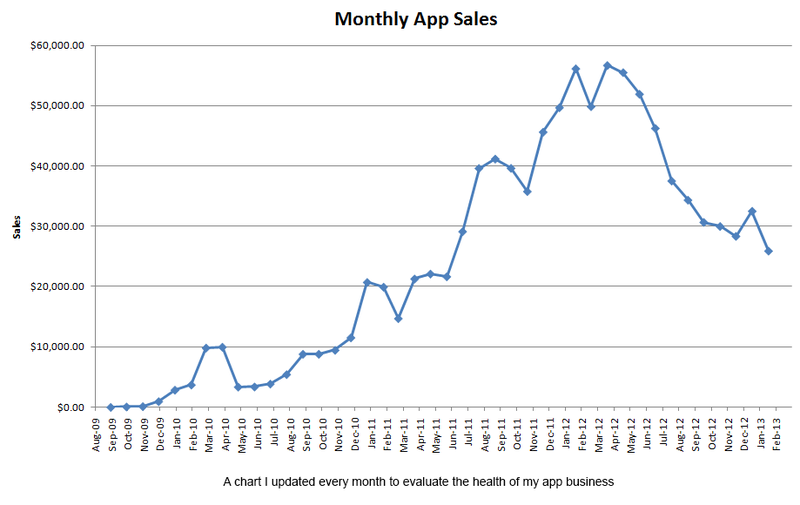 I was stoked during my entire Android app journey. Watching these numbers grow week by week, and scheming on what I can do each week to affect it became my daily obsession and joy. In many ways, the ups and downs of my Android app "startup" was similar to that of Picwing, except things were measured in weeks and not months or years.

But things that rise quickly fall just as fast. My Android business was no different. The interesting part of the app business ended after less than 12 months and I was left thinking how I wished the ride was just a little bit longer.

Richard Foster's book, Creative Destruction, shows that the average lifespan of a company in the Fortune 500 is about 15 years. How I wished my Android apps could have lasted 15 years! Unfortunately, due to the laws the govern app store rankings, which are set in place to incentivize developers to push "new and noteworthy" apps, the lifespan of a successful app business is significantly shorter -- on the order of 12 months.

And that's when it hit me.

Starting an app business is just like starting a "normal" startup like Picwing, only the timeline from start to finish is significantly compressed. The amount of financial investment you'll have to make is significantly lower as well. Of course, so will the potential financial reward, but I believe many of the lessons and experiences that took me years to acquire at Picwing, I could have acquired in mere months by starting my Android app business first. Most first-time founders will fail at their first startup -- the important thing is that if you fail, you fail fast and learn quickly from your experiences. Mobile app development is a great way for founders to take their first swing at building a company without risking a ton of time and money.

If you're thinking of jumping into starting a startup someday, and you're curious to experience what it's like before really diving in, I strongly suggest starting an app business first. You'll get most of the experiences -- good and bad -- in a much shorter period of time. If you like it you'll probably love doing a real startup.

ZenPayroll is culmination of my past 2 startup experiences and what I know will be my life's best work. I look forward every day to the new features we'll build and the customers we'll delight. But at the same time, I'll always look back at my 2 startup experiences with fondness and appreciation for what I've learned.

This is the personal blog of Edward Kim (aka Eddie Kim). Co-founder of Gusto.